Three years ago, quite out of the blue, David Young, one of BTO’s partners, suffered a seizure after a rugby tackle he had made in the annual Strathendrick RFC XV v President’s select XV. It was subsequently diagnosed as a brain tumour and what followed was life changing surgery, chemo and radiotherapy. In the meantime, his rugby mates had the brilliant idea of putting together a President’s team of players that David had the pleasure of playing alongside or against, with the intention of raising funds for The Brain Tumour Charity.

The fixture was originally scheduled for May 2020 and had to be postponed due to the pandemic. The fixture was re-scheduled to the 21 May 2022, and we are delighted to report that 47 President’s players answered the call and came from all corners of the UK and Spain. 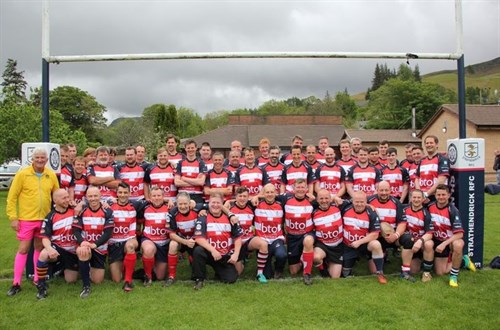 “The day’s events commenced with awards for Strathendrick Minis and Midis.

We welcomed the match ball to Fintry which had been run from West of Scotland over the Campsie Fells by Sandy Robertson and Euan Galloway. 15 miles and logging over 1,000ft of elevation they made great time. Originally it was West legends Donnie Robertson and Dave McKee who were going to run, but after 2 years of training covid again got in the way. It was an outstanding achievement by the apprentices.

At times the tackling was so hard that the President’s players seemed to roll back the years against Strathendrick whose average age was significantly lower. The final score was 43 – 43 which seemed the perfect result given the amount of effort put in by both teams. I was glad the referee was keeping a note of the score. It was in fact the ref, Robert Mchenry’s, last ever game and he handled it perfectly in the spirt of the occasion.

The pre-match awards and the match were watched by around 1500 - 2000 people. It was a great atmosphere and had a real community feel to it after the couple of years of isolation for many people. We don’t yet have a final total but are on course to raise over £20,000 for the charity. That’s humbling and my thanks to all the shirt sponsors, and for your donations, auction, raffle prizes etc. especially at a time when the cost of living is going up; and charities have come out of pandemic induced hibernation and are all competing for your money.

Maybe it was the thrill of playing rugby again after so many years of retirement, but the President’s team are all eager to play again next year!

Events like this are crucial to raise awareness and funds for the Brain Tumour Charity.  Treatments haven’t changed in 40 years and research into brain tumours is woefully underfunded – it accounts for only 3% of the money spent each year in the UK on cancer research - and yet brain tumours kill more people under the age of 40 than any other cancer.

Thanks again to everyone involved.”

If you wish to make a donation to The Brain Tumour Charity, please visit: https://www.justgiving.com/fundraising/matchballdelivery