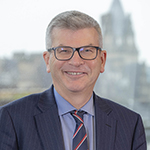 Andrew Sleigh is a very experienced corporate lawyer with a focus on the SME marketplace.

He has handled countless M&A transactions, investment negotiations, board room splits and shareholder disputes. He is viewed as "a capable lawyer with quite a following" and is especially noted for his expertise in shareholder and partnership matters. (Chambers UK)

Andrew is well known for his involvement in sports law, particularly in the arenas of football, boxing and golf. He has a band 1 ranking for sports law and is considered “hugely experienced, smart and knows the business inside out." (Chambers UK)

Andrew was educated at the Universities of Glasgow, Amsterdam and Virginia.

Past Captain of Pollok Golf Club and also plays at Royal Troon and the Golf House Club, Elie. A great admirer of Edward Hopper's art and Brian Wilson's music.